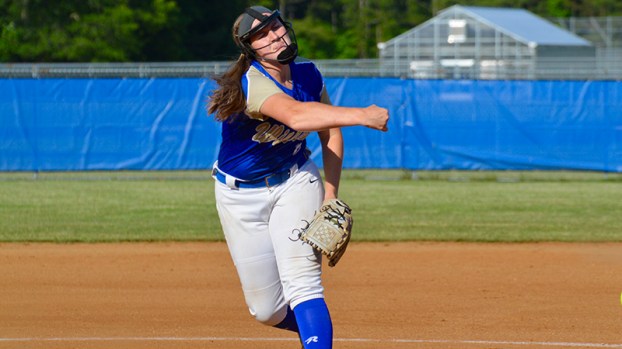 The Windsor Lady Dukes began their run in the 1A Region A tournament after finishing the regular season with a record on 16-4-1, earning them the number No. 1 seed in the tournament. After a first-round bye, the Lady Dukes hosted the No. 8 seed West Point Pointers on Friday night.

Senior E.J. Bankson was brilliant on the rubber as she threw a no-hitter to lead the Lady Dukes to a 7-0 victory.

The Lady Dukes got on the board in the second inning when Junior MaKayla Burks singled to bring in Sophomore Whitlee Hughes. Senior Torri Queen picked up the second RBI on the inning when she singled to left field, scoring Burks.

The Lady Dukes added two more runs in the fourth inning on an RBI single by Junior Cameron Pagan and an RBI Double by Junior Kayce Gray, making the score 4-0.

The Lady Dukes put the game away in the sixth inning, scoring three runs. In the inning, senior Alyssa Funai hit an RBI triple and came in to score on a Bankson sac fly. Junior Edythe Carr also picked up an RBI single scoring Whitley Hughes from third.

The Lady Duke’s offense collected 14 hits off West Point pitcher, Cater Zentner. Alyssa Funai led the way for the Lady Dukes picking up three hits in the game. Queen, MaKayla Burks, Hughes and Gray each had two hits, and Sydney Carter, Bankson and Cameron Pagan each had a hit.

Bankson earned the victory for the Lady Dukes going all seven innings while giving up no hits, one walk, and striking nine Lady Pointers.

With the win, the Lady Dukes advanced to the third round of the 1A Region A tournament, which they were scheduled to host the No. 5 seed Washington & Lee Lady Eagles on Tuesday, but that game was rescheduled for Wednesday.

JONATHAN SMITH is assistant coach for the Lady Dukes. Contact him at 242-6172.