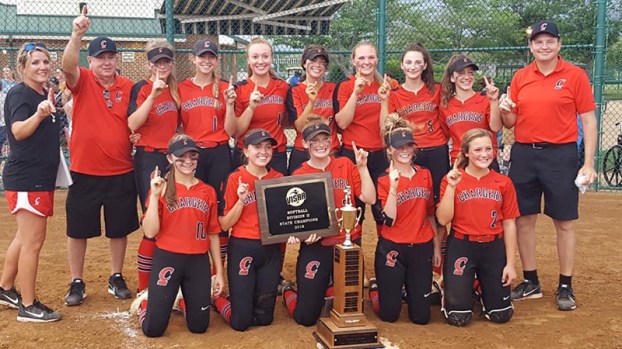 When senior center-fielder Kaylin Manner hauled in the final out of Isle of Wight Academy’s championship-winning 4-3 victory over Greenbrier Christian on May 22, it was a moment for beginnings as well as ends.

In addition to touching off a massive infield celebration among IWA players, coaches and fans, the win at the Stoney Run Athletic Complex was the end of the line for the Gators, who had won the previous nine Virginia Independent Schools Athletic Association Div. II titles.

It was also the end of a long championship drought for the Chargers. They had not won a state tournament since 2008, the most recent year Greenbrier did not win a championship.

IWA had advanced at least as far as the state semifinal round for the last seven seasons, with three of those defeats coming at the hands of the Gators, including a 1-0 loss in the 2015 title game. The six other losses were by a total of 11 runs. Isle of Wight also won a state Div. II trophy in 1993 and Div. III titles in 2004-2006.

And the future bodes well for the Chargers, too. They graduate but two seniors: Manner and Hayley Stallings.

To get to that point, IWA held off a late rally by Greenbrier Christian in their final at-bat. With one out, the trying run reached first base on an error and later advanced to scoring position. But Chargers’ pitching ace Mackenzie Wooten, owner of an 18-4 record, 159 strikeouts and only 18 walks in in 116-2/3 innings, induced the last two hitters to pop out to Manner in center.

Manner, who will play next year at Lynchburg College, also went 3-for-3 with a run, an RBI and a walk. Junior Madison Rountree was 2-for-4 — including a double and a fifth-inning home run — with three RBIs and a run scored.

To advance to the championship game, IWA had to gain the measure of local rival Nansemond-Suffolk Academy in a Monday (May 21) semifinal, also at Stoney Run. The Lady Chargers shut out the Saints 4-0.

They did so with explosive offense and lockdown defense. Rountree led IWA with two hits and junior Lauren Jones had a fourth-inning home run. The Lady Chargers also played an error-free game in the field.

The outcome wasn’t so rosy for the IWA golf team, which finished third by four strokes in the tournament on Monday (May 21) at the par-71 Meadowbrook Country Club in Richmond.

Carlisle School of Martinsville won the Division II championship with score of 338 strokes. Eastern Mennonite of Harrisonburg was second with 339, followed by Isle of Wight Academy with 342. Isle of Wight’s Sydney Grimes carded an 81 and teammate Jed Davies shot an 82. Both golfers received all-State honors based on the day’s performance.

Jonathan Smith WINDSOR The Lady Dukes shut out the Washington & Lee Lady Eagles 3-0 to earn a spot in... read more