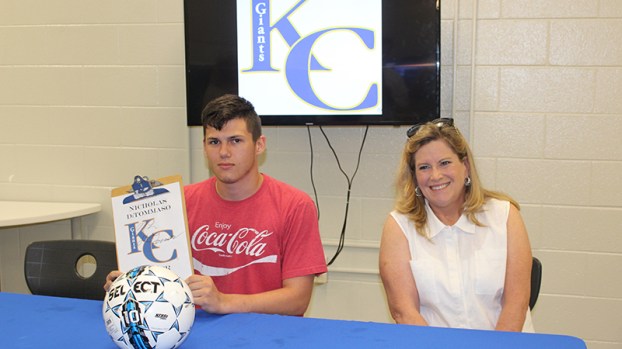 WHS senior Nicholas DiTommaso, left, holds up his signed paper, indicating that he will play soccer for Keystone College. Sitting with him is his mother, Robin.

On Friday at 10:40 a.m., Windsor High School senior Nicholas DiTommaso declared his intent to attend and play soccer for Keystone College this fall. The four-year institution is located in Factoryville, Pennsylvania.

“The coach reached out to me last-minute and gave me some pretty nice scholarships to come play,” the Dukes’ goalkeeper said of his decision, having previously planned to attend a two-year community college.

DiTommaso plans to major in data analytics. He has played soccer since his freshman year at WHS and will continue as goalkeeper for the Keystone Giants.

WHS Athletic Director Chuck Parrish said that DiTommaso is the sixth student athlete in the class of 2018 to have signed a letter of intent to play sports at the college level. DiTommaso, in fact, had already signed his letter as of Friday, and for the ceremony, instead signed a paper with the college’s logo. This will be displayed at WHS for the next three to four months alongside the signatures of other WHS seniors who have signed to play college sports, and then be kept on file.

Parrish added that the Dukes are currently the No. 5 seed out of 12 soccer teams and will play Chincoteague in a home game on Wednesday, May 23, at 6 p.m. This will be the first round of the regional tournament.