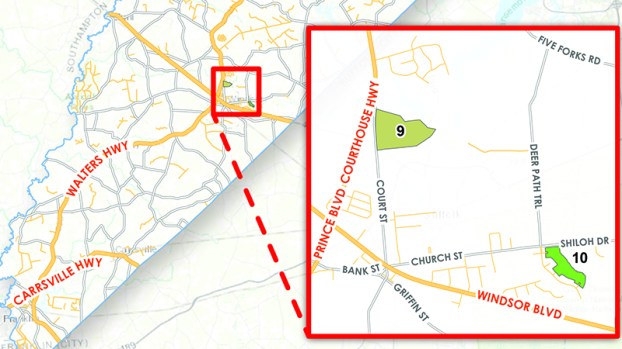 This map, prepared by Cooperative Strategies, shows the locations of the proposed Cambridge Villas (No. 9) and Holland Meadows Phase 2 (No. 10) housing developments in Windsor.

The completion of all currently planned and in-progress housing developments in Isle of Wight County could result in nearly 900 additional students entering the county’s public school system. This was the conclusion that the Ohio-based consulting firm Cooperative Strategies presented to the Isle of Wight County School Board during their meeting on Thursday evening.

The school division had contracted with the company in March to develop a subdivision and student potential analysis following an unanticipated boom in student populations at both of the county’s high schools at the beginning of the current school year. In September 2017, Superintendent Dr. Jim Thornton informed the School Board that Windsor High School had over 37 new students enroll since the first day of classes and that Smithfield High School’s student population saw a net increase of 73.

According to the study, the additional students are expected to enter the county school system within the next 12 to 13 years. This is based on an average of 143 single-family and 63 multi-family

building permits issued in the county between 2013 and 2017.

Lynn Briggs, the division’s director of media and community relations, said that the first 300 additional students are anticipated between now and 2022 when the developments currently in progress are completely built out. Briggs also confirmed that Isle of Wight County Schools’ facilities are not currently equipped to absorb the projected increase.

“The school division created a Long Range Facility Planning Committee, which consisted of mostly parents, who analyzed the current situation, proposed growth and made recommendations on how to best accommodate for the anticipated growth,” Briggs said. “The proposed plan will be shared with the community at two community meetings later this month.”

Those meetings have been scheduled for Tuesday, May 29 at Westside Elementary School and Thursday, May 31 at Windsor High School, both at 6 p.m. The School Board will later vote on the plan and the plan’s recommendations will eventually be presented to the county’s Board of Supervisors during the fall for inclusion in the county’s Capital Improvements Program.

Briggs said that at this time, the division believes the existing facilities in Windsor will be able to accommodate the growth in student populations from both Windsor developments.

“There could be the need for an additional bus or additional teachers, but there is not enough information at this time to know for certain,” she said.