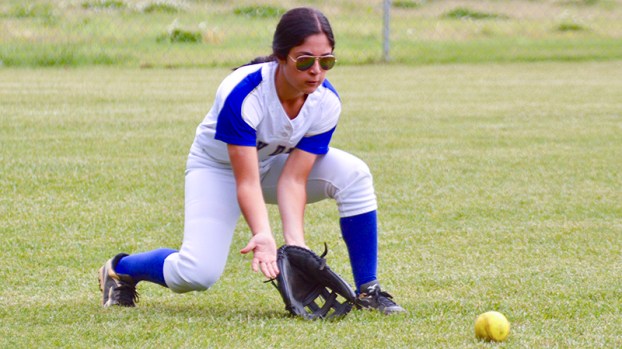 Left fielder Hailey Delgado making a play on the ball in the fifth inning.

The Windsor Lady Dukes defeated Park View on the road Monday evening, 8-2, to sweep the regular season series with the Lady Dragons. 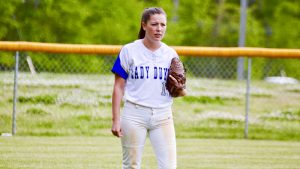 The Lady Dukes tied the game in the top of the sixth on an E.J. Bankson double that scored Alyssa Funai from second. The Lady Dukes took the lead for good in the same inning when Edythe Carr hit a sacrifice fly to right field, scoring Bankson.

The Lady Dukes secured the victory thanks to five runs in the seventh inning. Gray, Cameron Pagan and Hailey Delgado all drove in runs in the frame.

Bankson picked up the win for the Lady Dukes. She allowed five hits and two runs over seven innings, striking out seven Lady Dragons and not allowing a walk.

The Lady Dukes powerful offense tallied 11 hits on the day. Gray, a junior, led the way for the Lady Dukes going 3 for 4 with a home run and 2 RBIs. MaKayla Burks had a multiple hit game going 2 for 3 while Sydney Carter, Torri Queen, Funai, Bankson, Carr and Delgado all had a hit.

With the win, the Lady Dukes secure the No. 2 seed in next week’s Tri-River District Tournament.

JAMES J. LIDINGTON ISLE OF WIGHT Dixon Mills had three hits and drove in a pair of runs as Isle... read more