Judd Smith’s mobility is hindered to a degree by spina bifida, but not halted. The disease, which is congenital, paralyzed his legs from the knees down. Crutches and a wheelchair readily enable him to get around, but lately he’s has been looking for an upgrade in wheels. Not so much for everyday use, but for the kind that would enable him to compete in races. 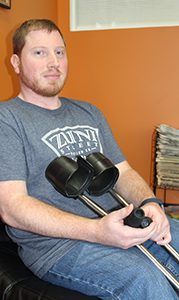 Because of spina bifida, Judd Smith of Zuni uses crutches to get around. He’s also seeking to get a wheelchair designed specifically for races.

Smith said he endeavored to use his regular wheelchair for a race in Smithfield this past February, but that was tough on him and the chair. He shakes his head remembering that day. But that event then started thinking about an alternative, getting a chair designed for racing.

Because of his disability, Smith is unable to sit or stand for long lengths of time, which also puts him out of the running for work. Where then to find the money?

The 35-year-old turned to setting up a Go Fund Me page to make his case, and the goal is $2,000 because the agency gets a share of the money.

The son of Richard Smith of Zuni and Cathy Duckworth of Mississippi, the young man said he frequently exercises at Anytime Fitness in Windsor.

“I’ve been feeling a lot better since working out here,” he said. In addition to improvements in health, Smith has also experienced a noticeable reduction in his pain.

“They’re like a family here,” he said. Recently, the staff and fellow patrons have been proving him right. After Smith mentioned his quest to employee Jen Stepp, she was moved by his ambition, and has championed his cause.

Today, April 28, the fitness center is hosting a barbecue fundraiser on his behalf. For $10 per plate, you’ll not only get a meal, but also help another person. Dinners are for pick-up only from 10 a.m. to 7 p.m. at Anytime fitness at 11403 Windsor Blvd., which is in the suite of stores near the Food Lion.

With the backing of owner Mischelle Goodman in hand, Stepp began the planning a month ago.

“We have full confidence in the community,” she said.

Smith shares that feeling and is hopeful that he’ll be able to get the chair sooner rather than later.

“If it works out, I hope to build myself up to half-marathons, such as the Shamrock race,” he said. Plans are in the making for him to participate in the Woman’s Club of Windsor’s third annual Run Through the Heart. That will be in Windsor on Saturday, May 19, starting at 10 a.m. Go to runthroughtheheart.com for registration and other details.

Any money that exceeds the cost of the wheelchair, Smith will donate to the Children’s Hospital of the King’s Daughters. That’s where he underwent a few surgeries in his childhood because of the spina bifida and a club foot, which had been corrected.