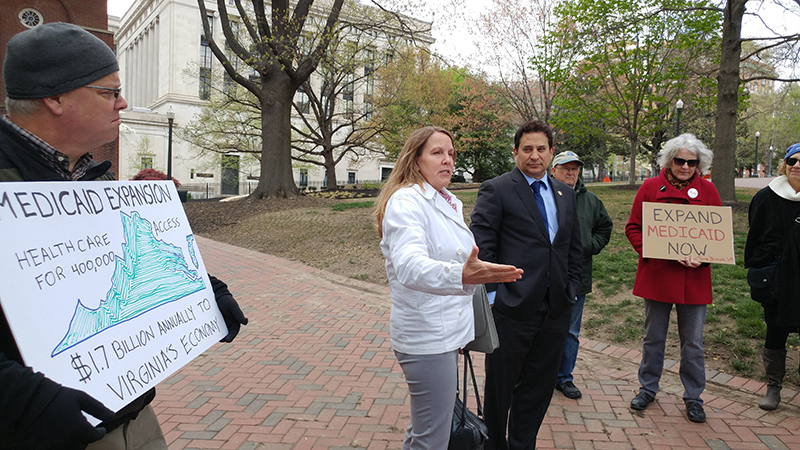 The House of Delegates passed a state budget that expands Medicaid in Virginia after advocates for the measure held a rally outside the Capitol.

Meeting in special session, the House voted 67-33 in favor of a budget for the 2018-2020 biennium that provides Medicaid coverage to more low-income Virginians. The legislation now moves to the Senate, which during the regular legislative session opposed Medicaid expansion.

Nineteen Republicans joined 48 Democratic delegates in voting for the House version of the budget.

“Our budget expands health care to 400,000 uninsured Virginians, and it increases funding for our schools, creates jobs and gives raises to teachers and law enforcement,” Del. David Toscano of Charlottesville, the House Democratic leader, and Del. Charniele Herring of Alexandria, the chair of the House Democratic Caucus, said in a joint statement.

“We are hopeful that our Republican colleagues in the Senate have seen the light and have heard the chorus of voices in support of expansion.”

House Speaker Kirk Cox, a Republican from Colonial Heights, expressed optimism that delegates and senators can reach an agreement on the budget.

Cox said the House passed “a strong, structurally-balanced two-year state budget that I am confident can serve as the foundation for a bipartisan, bicameral compromise.”

“Virginia has seen extended budget negotiations before, but what sets us apart from Washington is our willingness to work efficiently and directly to adopt a balanced budget before the current fiscal year ends” on June 30, Cox said.

The House vote came after legislators and citizens from across the commonwealth gathered Tuesday afternoon on the Capitol grounds.

“I really think our chamber will do what it needs to do, and I have to say, I think some Senate Republicans are coming around,” Levine said.

During the regular session, the House voted 68-32 in favor of a budget that included Medicaid expansion – a priority for Democrats. Expansion would include a Republican-proposed work requirement for those seeking Medicaid coverage.

Gooditis, who was elected last fall, said her political career was driven in part by her struggle to obtain Medicaid coverage to assist her late brother with post-traumatic stress disorder. She credited the “all-around caregivers” she met during these years for both her election victory and the high spirits she felt going into the special session.

“Keep making noise. It’s how I got here, and it’s how we’ll get it done,” Gooditis said.

Some at the rally are already looking ahead to what policies could follow the proposed Medicaid expansion. They expressed enthusiasm for a single-payer health care system, or “Medicare for All.” Levine said he supports such a system.

“People need to know that these are real people’s lives,” Levine said. “They need to know this isn’t some theoretical question; this is a question of whether people get health care or not.”

Legislators at the rally were critical of the current state of health care coverage in Virginia. While Levine praised the efforts of Doctors Without Borders in providing services in Southwest Virginia and the Northern Neck, he was nonetheless “ashamed” that residents there must rely on an international group that normally serves developing countries.

Lopez discussed the good financial fortune his family had when their newborn baby was delivered prematurely last year, a comfort he stressed wasn’t shared by everyone in his House district. Lopez said the 49th District, which includes parts of Arlington and Fairfax counties, ranks as “one of the most educated” in the U.S. and yet has the “fourth-highest number of people who could benefit” from Medicaid expansion.