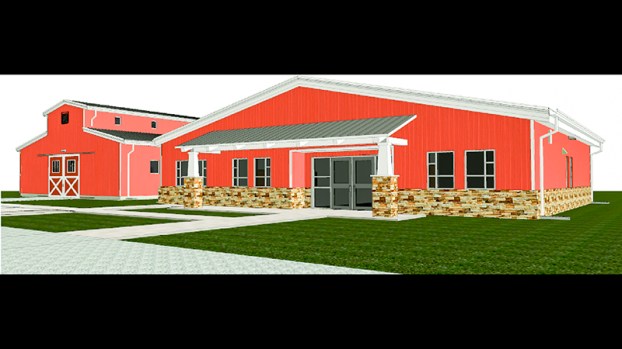 Construction of a “million dollar barn” behind Windsor Elementary School has started. According to Isle of Wight County Schools’ assistant superintendent, Mike Lombardo, the pouring of the concrete footing for the barn began this week.

Plans for the barn were first announced last school year as part of a $7.9 million plan to bring the division’s career and technical education program back in-house. The barn, which will include a classroom and stables, will be used by students enrolled in the division’s agriculture courses. The budgeted cost to build the barn has been estimated at $972,713. 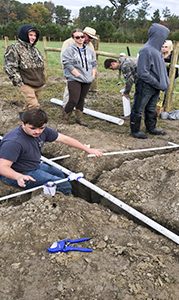 Students from Smithfield and Windsor high schools work together to construct water lines on the farm.

Lombardo updated the county’s school board on the progress of the barn and the agriculture program, which includes a working educational farm, also located behind Windsor Elementary, during the board’s meeting on Thursday evening.

Also presenting on the progress of the agriculture program were Daniel Judkins, the division’s farm manager, and four high school students currently enrolled in the courses. Lombardo said that since starting with an empty field this past September, the students have built several structures on the farm, including chicken coops, fencing, water lines, goat sheds and rabbit cages.

The division’s farm, also known as its agricultural land lab, also recently attracted the attention of the state Agri-tourism Conference. In March, Superintendent Dr. Jim Thornton and other division representatives were invited to speak at the conference, which was held in Williamsburg.

“We were the only school as part of the presentation,” Lombardo said. “We had folks who are producers and landowners texting their wives saying, ‘We need to move to Isle of Wight and enroll our kids in those schools.’”

“Basically what the Agri-tourism conference is is farmers who want to bring the community out to see their farms, get kids back into agriculture, get them to know where their food comes from,” Judkins added.

In keeping with this goal, the division has also recently succeeded in getting its farm listed in Isle of Wight County’s 2018 agri-tourism farm directory.

Construction of the barn is anticipated to be complete by September 2018.

Concerning the progress on the division’s other new CTE facilities, Lombardo announced that the Windsor High School greenhouse now has fully functional aquaponics and hydroponics systems and that the school’s construction lab had received its certificate of occupancy.