Carrie Hoeft has been named the coach for Paul D. Camp Community College’s softball team, and the Chesapeake resident is ready to begin recruiting for the fledgling program. 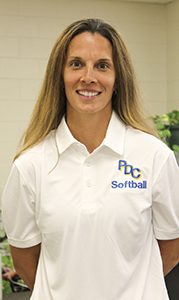 Carrie Hoeft has been hired as the coach for the PDC Hurricanes softball team.

After the position was posted, numerous applications came in from as far away as Arizona, Florida and New York, said Mitchell. The count was narrowed to five after interviews with himself and a handful of other people. About four weeks ago, the list was winnowed to three and another round of interviews followed. Mitchell said Hoeft was exactly who they were looking for.

She will be bringing her years of playing and coaching experience, most recently as the assistant softball coach for Stratford University. Hoeft has also run camps and clinics for more personalized training. The Hickory High School graduate also earned a degree in sports management at Virginia State University.

As mentioned, Hoeft will soon be recruiting. Her goal is to have 15 players by mid-July, and hopes to have 20 players in the fall. She figures there will be 10 to 15 games, depending on the weather.

In seeking out players, she wants to get 18 to 19 ‘true freshmen,’ as she calls them, and will be looking at how coachable they are, how they interact with other players and then their stats.

“I have a ton of connections,” she added.

Like PDC baseball, the softball team will also be affiliated with the NJCAA, Division II, Region 10.

Married, she and her husband have a daughter and two sons, also athletic.

“They keep me busy,” Hoeft said, adding that she also works out (“Keeps me sane,”) and plays racquetball and, since last May 20 has been the Mid-Atlantic World Outdoor Racquetball Director.

Her family, she said, is “super supportive.” Her parents still come to her games. “It’s pretty awesome.”

Her motivation for coaching is one that any softball player can appreciate.

“I love the game,” Hoeft said with a smile. “I was very fortunate in my coaches [while growing up.] They had a great impact on me and I want to be a great mentor on and off the field.”

WINDSOR Construction of a “million dollar barn” behind Windsor Elementary School has started. According to Isle of Wight County Schools’... read more