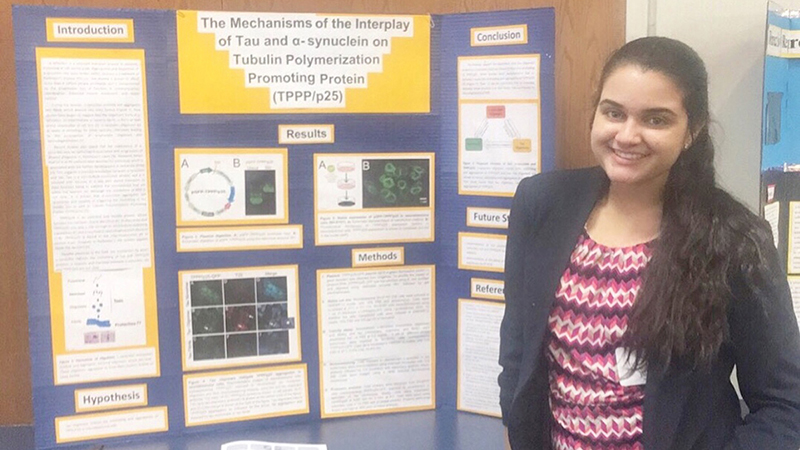 Anjali Patel with her display board at the 67th annual Tidewater Science and Engineering Fair, held on March 3 in Old Dominion University.

A Windsor High School student’s groundbreaking research on Parkinson’s disease has earned her a ticket to the Intel International Science and Engineering Fair in Pittsburgh, Pennsylvania — the world’s largest international pre-college science competition, held annually in May.

There, Anjali Patel, 18, who attends both WHS and the New Horizons Governor’s School for Science and Technology, will present her findings on a previously unknown interaction between two of the three proteins involved in the onset of Parkinson’s disease. Parkinson’s is a neurodegenerative disease that can cause problems with speech, motor control and balance.

The three proteins involved in the onset of Parkinson’s, Patel explained, are alpha-synuclein, tau and tubular polymerization promoting protein, abbreviated TPPP/p25. When alpha-synuclein and tau are functional, they are known as monomers, but when they mis-fold they become toxic, and are referred to as oligomers. 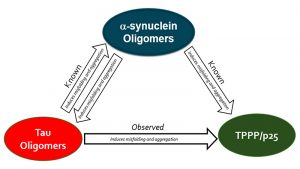 This diagram Patel created illustrates the triangle interaction between the three proteins involved in the onset of Parkinson’s Disease.

She added that human brain cells react to this mis-folding by clumping the resulting oligomers together into clusters called Lewy bodies (for alpha-synulcien) and neurofibrillary tangles (for tau), which are not toxic. Parkinson’s occurs when some oligomers escape the cell and act as “seeds of pathology” to other neurons, ultimately creating more of these clusters and progressing the disease. The presence of these Lewy bodies of alpha-synuclein in neurons is considered the pathological hallmark of Parkinson’s. Many patients with this disease later also develop tau clusters, which are associated with dementia.

To answer this question, she introduced all three forms of the tau protein (monomers, oligomers and fibrils) to a culture of a type of human brain cells called neuroblastoma SH-SY5Y, which she had previously cultured to express the protein TPPP/p25.

“What we were looking for was mis-folding and aggregation of tau and TPPP/p25,” Patel said.

She then showed a merged image created from multiple fluorescent microscope photographs of the cell culture showing a clump of proteins in one area specific area of the cell.

“This supports our hypothesis that tau can cause the mis-folding and aggregation of TPPP/p25,” she explained. “This interaction between these three proteins plays a vital role in the progression of Parkinson’s Disease.”

Patel’s research began at the beginning of last summer when she, over three months, read background information on the three proteins and many of the publications of Dr. Diana Castillo-Caranza, an assistant research professor at Hampton University, who is her mentor for the research project.

Now in her senior year of high school, Patel hardly spends any time at WHS, leaving each day at 9:50 a.m. to travel to the Governor’s School, which is located in Hampton near Thomas Nelson Community College. She is there until 2:35 p.m. each day and after that, goes to Hampton University to work at the lab on her research until about 6 p.m.

She first presented her findings at the 67th annual Tidewater Science and Engineering Fair, held on March 3 at Old Dominion University, where she won first place in the category of cellular and molecular biology, and the first grand prize overall. It was her grand prize win that got her invited to exhibit at the International Science and Engineering Fair in May. As a result of her categorical win, she will also have the opportunity to exhibit at the state-level science fair on April 14 at the Virginia Tech Carilion School of Medicine and Research Institute, located in Roanoke.

Patel’s expects to have even more results to present by the date of the international science fair in May, as she is only one third of the way done with her research. When all is complete, she plans to publish the results in a scientific journal with Dr. Castillo-Carranza.

Currently there is no cure for Parkinson’s, and Patel confirmed that even with this discovery, any new treatment based on her research is still many years away.

“But now we can focus on another protein interaction from the triangle,” she said. “We see more of the interplay and mechanisms of the proteins of the disease itself, how it works.”