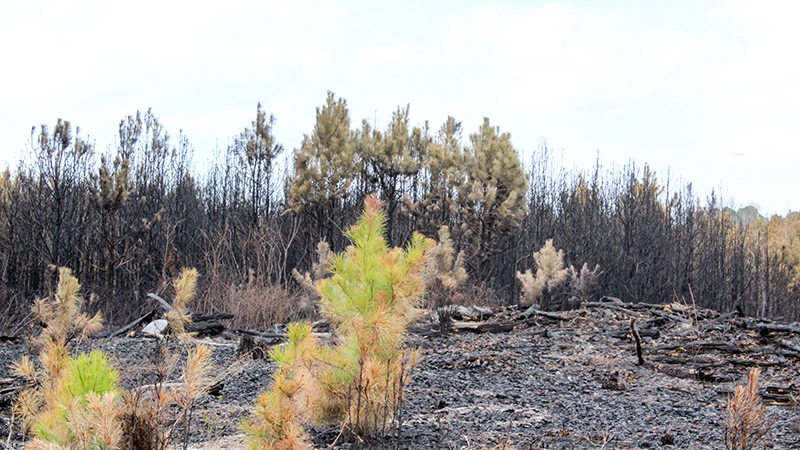 Seventy-five to 100 acres were burned by a brush fire in the vicinity of Hunt Club Road and Walters Highway late last Friday, according to officials from the Carrsville Volunteer Fire Department. In the foreground are trees that had been replanted before the blaze. There were no injuries to either residents living in the area or the firefighters.

Last Friday afternoon, units from the Carrsville Volunteer Fire Department responded to reports of a brush fire in the vicinity of Hunt Club Road and Walters Highway (U.S. Route 258) in Carrsville.

According to Carrsville station officials, the call came in at approximately 2:49 p.m. When firefighters arrived on-scene they discovered a brush fire encompassing 75 to 100 acres of cutover forestland where replanted trees had begun to grow back.

Additional responding agencies included the Windsor, Carrollton, Ivor and Hunterdale volunteer fire departments, the Franklin and Suffolk city fire departments and the Isle of Wight County Sheriff’s Office. The Virginia Department of Forestry also sent a team to the scene with a plow to clear a line around the fire to keep it from spreading.

The fire occurred in the vicinity of three houses, but firefighters were able to contain the fire before it could damage them. No injuries were reported.

No cause of the fire has been identified. However, Carrsville station officials said that the fire began on the edge of the road and was blown into the trees by high winds. The fire was declared under control by 6 p.m. However, responders remained throughout the evening to check for hot spots.

More snow on the way

IW schools close ahead of snow