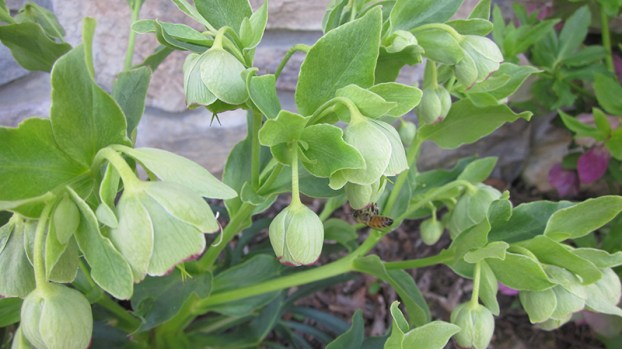 The unusual chartreuse-colored flowers of the early spring blooming bear's claw hellebore invite beneficial insects such as honey bees for a closer inspection and pollen transfer.

Amass your plants in attractive

This is the third in a series of four articles on plant selection when planning the flower border. The initial articles addressed color and line for attractiveness and to draw the eye closer or further into the garden. The next will discuss dependability, but today’s focus will be on mass. No, your garden is not going on a diet. But we are discussing clumps and drifts among other massive issues.

VCE’s four basics when choosing plants for a 4-season, mixed perennial border are line, mass, dependability and color. So, what is mass in the border bed? Let’s focus on the two main mass forms. Clumps are circular clusters of plants from one species or a single, large plant such as peony, daylily, purple coneflower for sunny spots or hosta, forest grass, astilbe for shade. Drifts are elongated groupings of a plant species that flow through sections of the border (VCE article 426-202.)

The height and diameter of the clumps should vary as well as the length of drifts. As a rule, don’t use single plants of many different plant species as this approach presents a jumbled look and chops up the flow of your bed. Muhly grass, blue sage and rudbeckia are useful to create drifts.

A garden planted with groupings of five-plus plants of the same species or cultivar will display repeating colors and textures. Replicating the clumps and drifts is a useful design element to integrate the visual effect. Each grouping should have an irregular shape. Use drifts to weave between clump forms.

A specimen plant differs from plant drifts in that a specimen is an unusual or impressive plant grown for ornamental effect in a prominent location. This plant serves as the focus of garden interest. Plants often used as specimens are flowering or have weeping or corkscrew form, bark that peels or colorful branches in winter.

Smaller plants like ladies mantle, silver mound or blue mistflower may be used as continuous edging along the front of the border bed. But remember to build in curves to the line.

Seed for Thought: Virginia is the only state to use the same plant for both state flower and tree. Cornus florida’s common name is flowering dogwood, thought to be in reference to the bygone use of this tree’s hard, slender stems for making skewers or toothpicks once known as dags or dogs.

Contrary to popular thought, the four showy white, petal-like bracts that open flat are not flowers. Rather, the true blooms are the yellowish-green flowers compacted into small, button-like clusters at the center. Look for upcoming local VCE MG events, including a plant sale. This VCE educational program is open to all.

KRISTI HENDRICKS is a member of the Western Tidewater Master Gardeners. Contact her at GardenontheJames@yahoo.com.

Spring Beauty lives up to its name