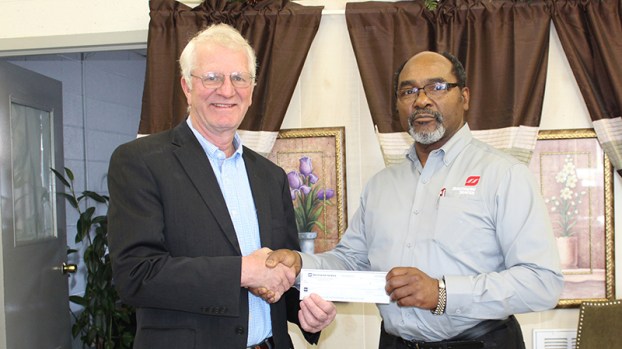 Rex Alphin, a farmer and former Isle of Wight County Board of Supervisors representative, accepts a check for $1,000 from Clarence C. Hucks, manager of Southern States TIdewater Petroleum Cooperative Inc. Alphin is involved with the production of a donation-funded documentary on peanut farming in Western Tidewater.

The documentary, titled “The Peanut Story… in a nutshell,” began as a project of the Western Tidewater Council for the Virginia Foundation for the Humanities approximately four years ago. It features interviews with lifelong area farmers who discuss how peanut farming has changed throughout the years.

Rex Alphin, a farmer from Isle of Wight County whose late father, Bob, is interviewed in the film, formally accepted the donation from Southern States Manager Clarence C. Hucks on Wednesday on behalf of the project.

Hucks explained that his goal in making the donation was to give back to the local farming community.

Alphin said he anticipates the filming to be complete by the end of this summer, and that the Western Tidewater Council is still hoping for a few more donations.

“We’re headed toward the finish line,” he said. “We’re hoping to air it next year on PBS and other public venues.”

Lynn Briggs WINDSOR Isle of Wight County School Board members were treated to an impressive display of creativity and faced... read more