Joseph Anderson “Andy” Wright Jr. is in Western Tidewater Regional Jail on a no bond status for allegedly having threatened Circuit Court Judge L. Wayne Farmer and his family. 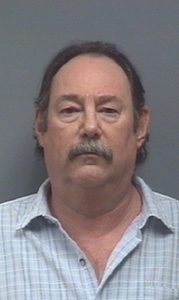 “We received information from a citizen or citizens within Smithfield that Mr. Wright had had a conversation with them, during which he made some very detailed specific threats against Farmer and his family and their well-being,” said Potter. He added that the remarks were made within the last seven to 10 days.

Following detectives’ investigation, the office believed it had enough information to take to the Isle of Wight County Commonwealth’s Attorney, Georgette Phillips, who convened a grand jury owing to the serious nature of the remarks. That jury issued an indictment against Wright, who reportedly last lived on Gurwen Drive in Smithfield.

“As a result of this most recent investigation it was determined that the threats were direct, planned and researched. It was also believed that Wright had acquired the means to carry out these threats,” Potter stated.

Wright was arrested on March 22 for a single indictment as it pertains to Virginia State Code 18.2-83, “Threat to bomb, burn or destroy by fire a building, structure or any means of transportation.”

“Investigators have long known Wright and have interacted with him in the past, mostly concerning a neighborhood land dispute,” stated Potter. He added that in the past Wright had made “vague and hypothetical statements of discontent with the legal system” as well as Farmer, who previously served the county as Commonwealth’s Attorney.

Potter also told The Tidewater News that Wright “has a great disdain for legal system, and holds Farmer responsible for previous legal dealings.”

The reason for just announcing the arrest now was explained by Potter, who said that a secondary investigation has been started and “more legwork was needed before releasing the information.”

Interim Sheriff James Clarke has reportedly had conversation with Suffolk and Southampton sheriff’s offices about security for Farmer, according to Potter. He added that a judge out of the 5th Circuit Court will be needed to preside in this matter with Wright.