William McCutcheon Camp Jr. died on Tuesday, and he’s remembered by some area residents for his service to the community at large. The 90-year-old was a son of the late William M. Camp and Edith Clay Camp, who lived in Franklin. William and his family made their home in Carrsville.

One of the village residents to share reminiscences is Phillip Bradshaw, who said his father, Joel, was a good friend and colleague of Camp.

In addition to serving on the Isle of Wight County Board of Supervisors, Camp was one of the major supporters of the local Boy Scout Troop. 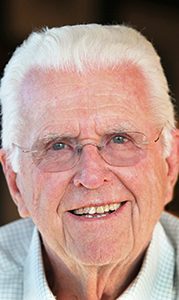 “He was a very strong supporter of our Scouts,” said Bradshaw. “He was instrumental in organizing and encouraging my dad in the founding of the troop.”

The establishment of the former skating rink on Walters Highway near the intersection of Carrsville Highway is also partly to his credit. Bradshaw added that Otelia Rainey and Camp had been active in the site. Camp had also given money to repair the place after hurricane damage.

“He was very interested in the youth of the community and providing opportunities for youth,” Bradshaw said, and added that included the creation of the county’s Parks and Recreation Department.

Further, Camp and his wife, Shirlee were “very service-oriented over the years, but never looked for recognition and accolades.”

Other county-related involvement included the Industrial Development Authority, which Camp was involved in after his time on the supervisors’ board.

“He was very concerned with economic development in the county,” Bradshaw said.

Another person who will remember Camp fondly is his barber, Mable Parker of Mable’s Barber Shop in downtown Franklin.

“He did spent a lot of time in the shop, and would see people he hadn’t seen in awhile,” said Parker, who added that she had known him for 23 years. She also said she enjoyed listening to his stories.

“He was a wonderful person and never judged people,” Parker said. “He was just a lot of joy.”

Obed Anon Spady of Battery Park said that Camp was already on the supervisors board when he joined in 1978.

“He was a joy to work with,” Spady recalled. “He was easy to get along with.”

In addition to working together, the two families also socialized. Spady said their wives even went on a cruise together.

“Billy knew what was important. There were times to be serious and also to have a little fun,” said Spady. “There are not many people like him. He was one of a kind.”

The funeral and graveside service at Poplar Spring Cemetery in Franklin are private. Details of life’s accomplishments can be found at www.tidewaternews.com.

Wright Funeral Home is in charge of arrangements.