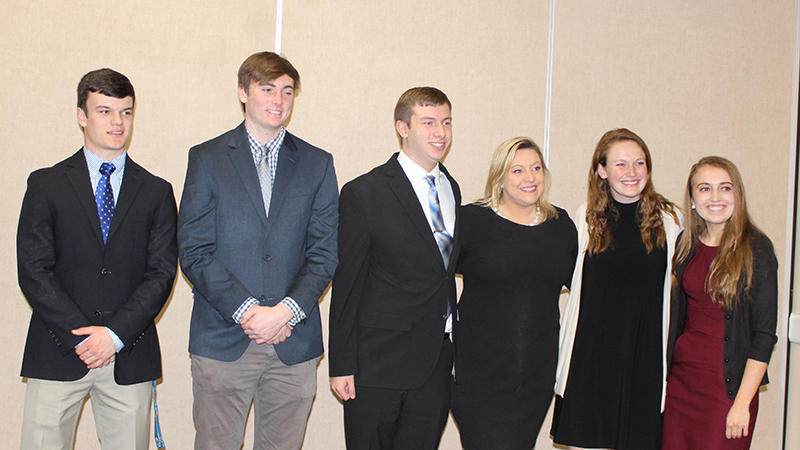 Three state legislators whose constituent territories include Isle of Wight County traveled to Smithfield on Tuesday morning for the annual Richard J. Holland Post-Legislative Breakfast. The breakfast is held every year in the Smithfield Center to provide county residents with the opportunity to hear a first-person account of what transpired during the most recent General Assembly session, and to hold their elected representatives accountable.

“Constituents, it’s time to get out your microscopes and put your legislators under it, see how many times they crossed party lines and voted your interest,” said Farmers Bank CEO Dick Holland during his opening remarks. Holland is the son of the late State Sen. Richard J. Holland of Windsor, for whom the breakfast is named. 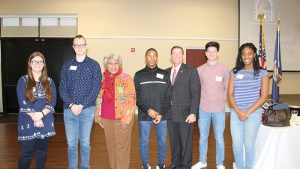 First to speak on the 2018 General Assembly session was Brewer, who highlighted her efforts to streamline the state’s adoption and foster care process. Her first bill, House Bill 241, proposed lowering from three to two years the amount of time a child must continuously reside with or be in the physical custody of a prospective adoptive parent in order for the adoption proceeding to commence in circuit court and be exempt from the parental placement provisions.

The bill passed the House 98-0 in January and was one of six she had proposed that successfully made it to the Senate.

“Bipartisanship is not dead,” Brewer said. “All bills I got out of the house passed 100 percent.”

She also highlighted two bills she helped defeat, one of which she described as a “Netflix tax” and the other, an “Uber tax.” The first would have imposed a tax on internet streaming services such as Netflix and Pandora radio, and the second would have taxed internet-based transportation services such as Uber and Lyft.

Next to speak was Cosgrove, who described the first six weeks of the 2018 session as “fairly mundane.”

“The real hard work and some of the butting heads came about in the past two weeks,” he said. “Basically the House budget and the Senate budget were vastly different. Those of us on the Republican side felt there was way too much on full-blown Medicaid expansion.”

Despite his criticism of the House budget, he praised Brewer for her efforts during her first year as a legislator.

“Emily did a magnificent job for her constituents, it’s not an easy place to have a stiff spine and hold your ground,” he said.

Last to speak was Lucas, who, like Brewer, highlighted the House’s bipartisan achievements.

“We may not always agree, but we never leave angry, and we do cross lines to vote on issues,” she said. “A lot of the bills that were passed this year, we all voted the same. We’re not that different, except when it comes to some of the social issues.”

The legislators then participated in a question and answer session, moderated by Isle of Wight-Smithfield-Windsor Chamber of Commerce President Andrew Cripps. Questions were submitted anonymously via paper forms and then read aloud.

The first question posed to all three legislators concerned what the General Assembly was doing to help municipalities. To this, Lucas responded that one of her key issues, as someone who had once served at the local government level, was unfunded mandates. These occur when municipalities are tasked with implementing new laws, but are not provided any additional funding from the state to accomplish said implementation. Lucas said she would work to make sure the General Assembly did not send orders to local government bodies without funding along with it.

Cosgrove, on the other hand, said sometimes the municipalities themselves created problems and spoke in favor of legislation that reduced the amount of say that cities and counties have over the installation of wireless communication towers.

“A lot of my district is underserved or not served by broadband,” he said. “Cox and Comcast are not going to run lines out to serve just a couple of people. This bill basically took the ability of the localities to deny these wireless towers. The kids in Surry are just as smart and have just as much right to a proper education, and if you don’t have that high speed access, you can’t compete.

“The problem is these companies, Sprint, Verizon, had wanted to put these towers in and counties would go, ‘No, we already have a franchise agreement with Company B.’”

“You all could have done this [approved these towers] but you didn’t,” he added, addressing the municipal government representatives present.

Another question concerned Medicaid expansion and whether or not the federal subsidies created by the Affordable Care Act for Medicaid expansion should still be considered a reliable source of funding under the Trump Administration.

Lucas said she felt confident that if Virginia expanded Medicaid, the General Assembly would not be left with the bill if the Affordable Care Act were to be repealed.

“They’ve tried to replace it, I don’t think it’s going to happen,” she said. “We have been giving away over $7 million per day by not expanding Medicaid, that does not sound like a good business model to me, and the impact on hospitals is devastating.”

Cosgrove disagreed, saying, “Some people say there’s a kill switch in this where if federal dollars stop, Medicaid expansion goes away. It only takes one member of the house to take out that kill switch, so if we do full-blown Medicaid expansion it’s there to stay no matter what happens with the federal government.”

The legislators will return to Richmond to finalize the budget in April.