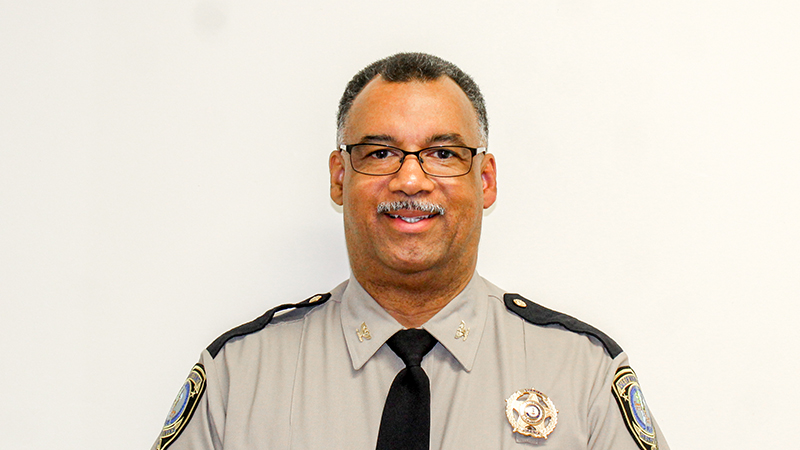 [Editor’s note: James R. Clarke Jr. is one of two candidates running for Isle of Wight County Sheriff. His opponent, Lt. James W. Pope, was profiled in the Feb. 3 edition of Windsor Weekly.]

Clarke assumed command of the Sheriff’s Office on March 1, the day after Marshall’s last day, and hopes to build on many of his accomplishments if elected, including maintaining the agency’s accreditation and having plans in place for the succession of leadership.

“Mark Marshall strongly believed in succession planning, training people for the next level,” Clarke said. “I would definitely keep that going. When I retire, I want someone to be able to step into my shoes and for the citizens of Isle of Wight to know they have a trustworthy person.”

Another priority that Clarke highlighted was to continue the School Resource Officer Program, and to work with school and county administrators to strengthen security at the county’s public schools.

“School safety is paramount to me, my wife works in the school system, my grandchildren go to Isle of Wight County Schools,” he said. “For me, prevention is of the most importance — how can we prevent someone from just walking into a school?”

Whatever the solution, Clarke said that it would likely require increasing the agency’s training with schools and other local partners, to include the police departments of the county’s two incorporated towns.

“Because if something happens, we’re all coming,” he said.

Clarke also hopes to share the same crime prevention training with the county’s churches and daycares, as well as to make the Sheriff’s Office more visible in the communities it serves.

“We try to be proactive, sometimes we’re reactive, but I want the Isle of Wight Sheriff’s Office to be interactive,” he said.

Clarke explained this statement to mean that citizens are comfortable interacting with sheriff’s deputies and don’t just see them when they need help.

“They can walk through the office, they can do citizen ride-alongs, they can meet and greet the deputies,” he explained. “We’re human. We get this bad image because another agency across the country did something out of policy. I’m a husband, a father, a grandfather, a minister in my church, a youth basketball coach. I’m a human being. We can relate on another level than strictly law enforcement.”

This priority would include the development of a youth mentoring program, Clarke said, which could provide high school juniors and seniors with the opportunity to get a realistic impression of what is involved in criminal justice before they go off to college.

He has worked in law enforcement for the past 19 years, most recently as chief deputy under Marshall. Prior to that, Clarke served as a patrol lieutenant with the Smithfield Police Department. He is also a veteran, having served 24 years in the Marine Corps Reserves, attaining the rank of first sergeant. Clarke is a lifelong resident of the Ivor/Zuni area of Isle of Wight County and grew up on a farm.

“We raised peanuts, beans, corn, hogs, chickens ‚ what Isle of Wight is is who I am,” he said.

Clarke has been married to his wife, Jacqueline, also a native of Isle of Wight, for 30 years. They have three children and eight grandchildren.