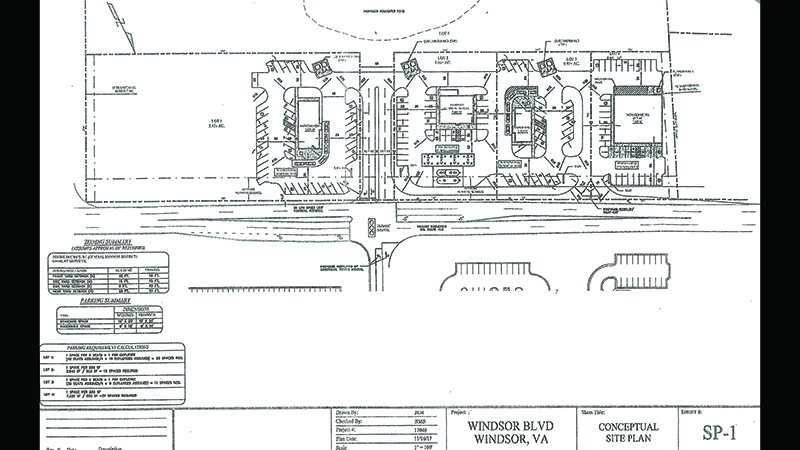 A schematic drawing of a proposed shopping center on Windsor Boulevard in the town.

The Town of Windsor’s Planning Commission voted unanimously on Feb. 28 to recommend approval of rezoning a parcel of land located on the opposite side of Route 460 from the Windsor Food Lion from A1 agriculture to B1 commercial. The parcel is the proposed location of a new shopping center.

The commission had previously discussed the matter last December when landowners James and Susan Eilberg of Norfolk made their case for the rezoning. Acting on the recommendation of Planning and Zoning Administrator Gary Mitchell, the commission had tabled their vote on the matter until a traffic impact analysis could be completed.

Logan Hixon — a real estate manager with Hutton, the company hoping to purchase the land from the Eilbergs and build the shopping center — announced at the February meeting that the requested TIA had since been completed at Hutton’s expense. The study, conducted by Berry Engineers LLC of Cleveland, Tennessee, examined the impact of the first phase of the project, which includes the construction of four separate commercial structures, and the second phase, which would realize either an additional 50,000 square feet of commercial real estate space or 250 units of multi-family development. The study concluded that the first phase would result in only four to five seconds of delay per vehicle during the morning and afternoon peak periods. For the second phase, it concluded that traffic volumes would only increase by around two seconds delay per vehicle.

Several commission members expressed concerns regarding whether anyone parked at Food Lion would attempt to cross the highway on foot to visit the new retail or fast food locations, and asked whether the most current set of plans include any form of crosswalk.

“We have a problem in town, even in the center of town, where you take your life in your hands if you want to cross [460,]” said commission member Glyn Willis.

To this, Hixon replied that Hutton would have a full traffic layout available for the commission’s viewing next month, which would include pedestrian crossings.

Commission member Macon Edwards, who also sits on the Town Council, then asked whether the company had addressed the city of Norfolk’s concerns yet, referring to a memorandum dated Dec. 4, 2017 from David Rosenthal, a reservoir manager with the city’s department of utilities, to Mitchell. The memorandum had expressed concerns regarding two of the shopping center’s proposed tenants — a fast food establishment and a gas station and convenience store with underground gasoline storage tanks — and their proximity to a city-owned drinking water line from Lake Gaston that crosses the property.

Hixon said that the company had not yet contacted the city and that for them to be able to answer the city’s questions, they would have to conduct a hydrologic and hydraulic study.

With the Planning Commission’s favorable recommendation now secured, the matter will go before the Town Council for final approval in April.