This multi-stemmed small tree or large shrub with shiny gray-brown bark reaches 15 feet tall. Both male and female flowering structures persist through the winter. In winter, smooth alder can be recognized instantly by two reproductive structures. 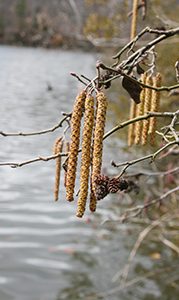 Alders are most important as pioneer species that stabilize and fertilize barren areas such as strip mines, clearcuts and riverbanks.

The small cone-like female catkins are from the female flower of the previous year while the yet-unopened catkins are of the coming year. The future “cones” that will be pollinated by the catkins are themselves still tiny in winter.

In the spring the male flowers are yellow-brown drooping catkins. Alders are wind-pollinated, and release pollen before the leaves emerge.

Dark green leaves have wedge-shaped bases and leaf edges are usually finely toothed. The glossy summer foliage becomes yellow and tinged with red in the fall. The reddish buds grow from the twig on short stalks, another identifying feature in the winter, since the buds are not stalked in most trees and shrubs.

Alders are most important as pioneer species that stabilize and fertilize barren areas such as strip mines, clearcuts and riverbanks. These small trees fix nitrogen from the air in a symbiotic relationship with bacteria in the root system, which nourishes the tree. As alder leaves fall, the nitrogen-rich litter quickly fertilizes barren ground. Many conifers have been shown to grow better in areas where alders have preceded them, so alders are often planted as the first step in reforestation.

The only alder native in southeastern United States, smooth alder grows in disturbed and wet areas, commonly found at the edge of water. This shrub or small tree is common in eastern and central U.S. and in most counties across Virginia.

Inner bark can be ground into a crude flour in an emergency. Deer will eat the twigs, but it is not a favorite food.

Susan and Biff Andrews The family went to OBX last weekend. Temperatures were in the 70s. Tulip trees were in... read more