Titans going deeper in their education 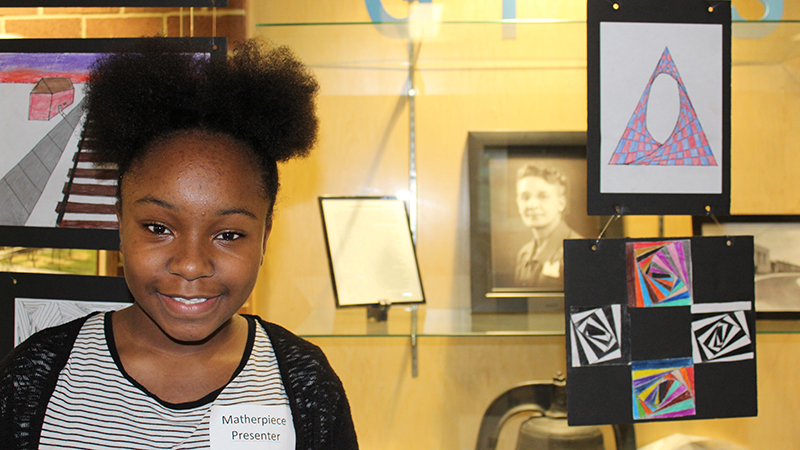 Takira Saunders and her MATHerpiece, which features four squares and a spiraling pattern within.

The mathematics of art, stop-motion photography and life on Titan all have one thing in common: They were the among the several topics of study by the young Titans of Georgie D. Tyler Middle School. On Tuesday, they presented their Expo of Deeper Learning to their parents, siblings, relatives and other visitors. 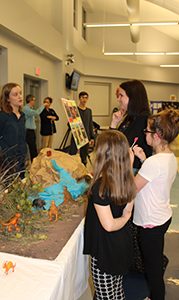 Amy Carr with Reagan Carr and Kayen Pierce listen to Ember Lytle talk about her experience of making a movie.

In the cafeteria, eighth graders Johnathan Gurin, Gabrielle Alvaruz, Chelsea Cook, Judith Pope and Luke Jackson explained how they created short films — ranging about one minute apiece — by taking one picture at a time for each slight movement of their dinosaur figurines moving in their specially built landscapes. Gurin added that work started back in November, and Gabrielle said the assignment was “very hands-on and our own creation.”

Ember Lytle said that for her, the retakes were the most challenging part of the project. She figured 4,500 photos were taken to create her movie.

What might life be like on Titan? After research, the young Titans speculated by creating detailed images of cellular life that could thrive in the atmosphere of Saturn’s largest moon.

Another project included the leaf process, in which students contemplated character traits they have now, and those that they want to achieve.