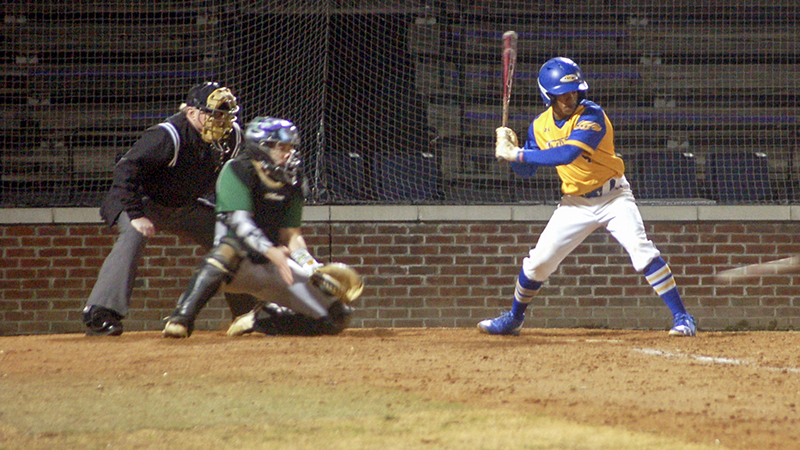 Paul Parker of the PDC Hurricanes watches as a ball comes to the plate during the game against Thomas Nelson Community College last Friday. This proved to be the first win for the Hurricanes. Find out more on page B1.

According to PDCCC’s athletic director and head baseball coach, David Mitchell, Hurricanes pitcher Seth Konkel got the win on the mound, pitching 3.2 innings of relief. Konkel struck out eight batters and allowed one hit and one run.

Lokan Keheley also pitched 2.1 innings and Michael Portella pitched one inning. The Hurricane pitchers combined for a 1-hitter and struck out a total of 12 Gator batters.

In addition to being the first the first win in the college’s history, it is also the school’s first of the season. The Hurricanes are now 1-4 overall, having lost to the Apprentice School on Feb. 7 and to Stratford University on Feb. 8. They also fell to Virginia Wesleyan’s JV team this past Saturday and to Bryant and Stratton College on Sunday.

Mitchell remarked to The Tidewater News last week that of the other games played so far this season, the Hurricanes, comprised of freshmen and sophomores, have been playing against more experienced college juniors and seniors. The Apprentice School, Bryant and Stratton and Stratford are all four-year institutions. Thomas Nelson is the first two-year institution comparable to Paul D. Camp that the Hurricanes have played this season.

Mitchell added that all 22 players on the Hurricanes’ roster have received playing time in the five games played so far.

Today, Feb. 17, the Hurricanes will again face Bryant and Stratton at 1 p.m., and will rematch the Thomas Nelson Gators on Sunday, Feb. 18, also at 1 p.m.

The Hurricanes are a member of the National Junior College Athletic Association – Region 10.