Greenbriers are daunting to gardeners, important to wildlife 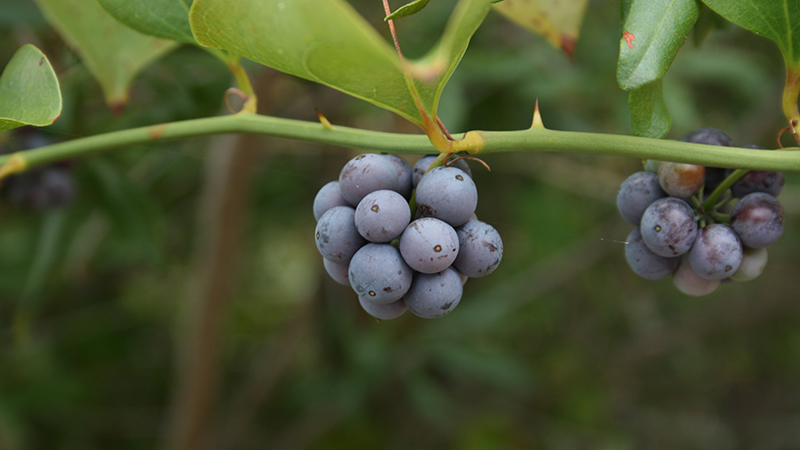 Tiny yellowish-green flowers (male and female on different vines) of the Common Greenbrier bloom for two weeks in April or May, followed by clusters of blue-black berries from September through November. Among the many birds that feed on the berries are Catbird, Brown Thrasher, Eastern Bluebird and White-throated Sparrow.

Greenbrier, Catbrier, Sawbrier, Bullbrier, Carrion-flower — members of this genus have many common names, none of them conveying that of a friendly plant. Rather, the leaves of many species have strong prickles, and the stems have thorns to hook onto branches of other plants. New homeowners of old farms and less-than-new houses often find part of the property covered with dense impenetrable thickets of the vine, viewed by some as “razor wire.”

While clumps of these plants are daunting to gardeners, all this greenery is important food and shelter for wildlife. Black bears eat the berries and shoots, deer graze on new growths and birds enjoy the berries, passing the seeds along to another site. Native Americans found many uses, culinary and medicinal, for species found here in the Coastal Plain.

Common Greenbrier (Smilax rotundifolia) was described by Linnaeus from plants collected by colonial botanists and sent to Europe. Also known as Sawtooth Greenbriar, Horsebrier and Round Leaf Greenbrier, this is not a plant loved by gardeners. This vine grows all over natural wooded areas, draping stems from shrub to shrub — it’s easy to get caught in a group of bending and sprawling shoots, the thorns catching on smooth clothing and impossible to remove from woolen sweaters.

Easy to recognize, Common Greenbrier has rounded leaves that are bright green on both sides, and strong parallel veins. While these leaves often persist over the winter, most species are deciduous. Tiny yellowish-green flowers (male and female on different vines) bloom for two weeks in April or May, followed by clusters of blue-black berries from September through November. Among the many birds that feed on the berries are Catbird, Brown Thrasher, Eastern Bluebird and White-throated Sparrow.

Catbrier (Smilax bona-nox) is distinctive for the leathery, triangular leaves with a broad lobe on each side, presenting an “eared” appearance. This is a woody vine that climbs and winds with tendrils up trees, over shrubbery and along the ground, creating thick brambles. The smooth, green stems grow to 20 feet long, and are covered with stout, sharp prickles that make passage very difficult. Leaves are green beneath, often mottled with white. The leaf edges are often bristly and when smooth, a raised, wire-like vein runs along the margin.

In late spring, small, inconspicuous flowers appear in clusters in the axils of the leaves, male and female on different plants. Following the flowering period, clusters of blue fruits are very attractive to wild turkeys, squirrels and many species of songbirds during the winter. White-tailed deer will browse the foliage, not bothered by the thorns on the lower parts of the plant. The seeds are dispersed by animals and can be carried long distances by birds.

Native Americans and colonists cooked the shoots of greenbriers and added young leaves and tendrils to salads, well into summer. The roots form a large tuber similar to a sweet potato that served many needs. Dried, pounded to a powder and mixed with water, the final paste was used to thicken soups, to make jelly and to treat minor aches and pains. Francis Peyer Porcher, an American botanist, wrote that the American Indians, as well as soldiers during the Civil War, fermented the Greenbriar tuber into a “home brew” adding sassafras for flavor to enlighten their spirits. The leaves of the Greenbriar can be used as a dressing for cuts and burns.

Children learn what they live