Dukes fell to Ponies, but played with heart 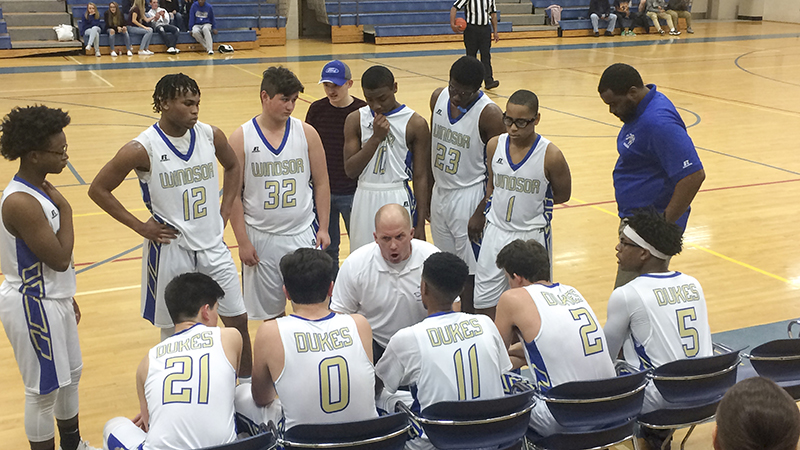 Coach Erik Johnson outlines the next strategy for the varsity Dukes in their game against the Ponies.

Although Windsor High School boys junior and varsity teams both lost to Chincoteague High School on Saturday, they each repeatedly showed their determination to play well.

The younger set of Dukes played first, with the Ponies getting two points within three seconds of the first quarter. At the 4:23 mark, Windsor earned its two points, followed by a 3-pointer nearly two minutes later. A free throw for the Pones tied the score at 5 all. In turn, Dukes got one of their own to make the score at 6-5. With :16 seconds left, though, Chincoteague got two more points and kept Windsor from any more scoring.

Within 45 seconds of the second quarter, a free throw for the visitors had them at 8-6, followed soon by a basket for Windsor. Though the Ponies gained points to put themselves ahead, the Dukes were only a few behind in the remainder, putting the score at 17-13 in Chincoteague’s favor at the half.

At 4:51 in the third, the Dukes got a 3-pointer, with another point about 22 seconds later. The Ponies then pressed to increase their lead, and kept the Dukes at 17 points for several minutes. By the end of that period, the visitors were at 27 to the hosts 22.

Chincoteague continued to stay ahead in the fourth, gradually increasing its lead by several points so that by the buzzer, they had won 34-27.

Erik Johnson, who coaches for the Windsor boys junior and varsity teams, said, “They played hard … they played with heart. I’m impressed.”

When it came time for the varsity game, the more experienced Ponies started out by getting a basket within nine seconds of the first quarter. The Dukes gained two points of their own seconds later, and tied 4-all with the opposition at 6:53. Not 30 seconds later, Chincoteague earned two free throws, another basket, followed by two more free throws. All the while, Windsor stayed at 4 while the visitors worked hard to increase the point spread. By the end, the score was 24-14 in the Ponies’ favor.

The difference continued in the second quarter, with the Dukes getting a couple of baskets here and there. All the while, Chincoteague earned points either through putting the ball through the net in action or by the six free throws. With :20 left on the clock, Windsor was at 26 to the visitors’ 45.

The third quarter saw the Dukes working harder to gain points, and were at 44 to 59 at the end. The momentum continued in the fourth with Windsor scoring more and more frequently. At :49.6 left, the score was 64-78, and the Ponies were kept scoreless for the remainder. The Dukes decreased the difference by getting baskets at :26; :9.2 and :8 seconds left. At the end, their efforts put the score at 70-78 in Chincoteague’s favor.

Johnson acknowledged that Chincoteague played very well, but was no less impressed by his own team’s aggression, heart and determination. He noted progression in the boys’ playing.

“I’m proud of every one of the boys,” said Johnson.