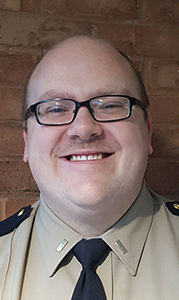 Lt. James William Pope, an officer in the Isle of Wight County Sheriff’s Office, has already declared his intention to seek Sheriff Mark Marshall’s position whenever it comes time for the election this year. A few weeks ago, Marshall had announced his resignation, to become effective March 1. He plans to become involved full time in a family-operated brewery on the Eastern Shore.

Pope sees the upcoming vacancy as an opportunity to fulfill a personal ambition.

“My goal now is the same as day one when I joined: To move up through the ranks and eventually becoming a sheriff,” he told Windsor Weekly earlier this past week.

His interest in law enforcement began at home through his mother, who was an EMT volunteer. That presented “lots of exposure” to the world of first responders, adding, “I fell into my niche.”

Further interest in law enforcement was nurtured when Pope had joined the Suffolk Police Department’s Explorer Unit, which is a cadet-style program, and eventually earned the top rank of captain.

Growing up on a family farm in the Chuckatuck Borough of Suffolk, he graduated from Nansemond River High School in 2000, followed by studies at Virginia Commonwealth University. After a couple of years there, Pope began work at a Subway in Smithfield, becoming store manager. After four years there, he went to work as a deputy sheriff in 2004.

“That was the best investment I ever made,” Pope said of the career change.

Later, he was promoted to lieutenant, and was named patrol commander in 2010. Pope credits learning leadership traits under Marshall. Responsibilities as a lieutenant have included not only answering calls for service and managing personnel, but also handling complaints, managing the patrol division budget and the fleet, coordinating security for special events, delegating duties in the lower ranks and reporting to the sheriff.

As patrol commander for the past seven years, Pope has been “boots on the ground” when it comes to serving the public. That duty has required him to be especially visible to and have the most contact with people.

He said, “I think I’m very mature for my age [35.] I am here for a long-term investment. I want to stay involved in the community and continue to be visible and approachable.

In addition to earning a degree in criminal justice from Liberty University, he is studying to become certified as an assessor, which would enable him to evaluate sheriff’s offices in other parts of Virginia.

“I intend to continue the accreditation which we received in 2014 under Sheriff Mark Marshall,” Pope said. “I am glad to have served under his leadership and I plan to continue pushing this department to reach its fullest potential.”

One way of doing so would be to involve other community members where feasible. He’ll also look to re-introduce the auxiliary deputy program, which would be made of mostly retired law enforcement officers in Isle of Wight.

“I love Isle of Wight,” said Pope. One demonstration of his dedication to the county is such that he, his wife, Ashby and their son, A.J., moved to a small farm in Zuni. His family has also given him 100 percent support of his goal.