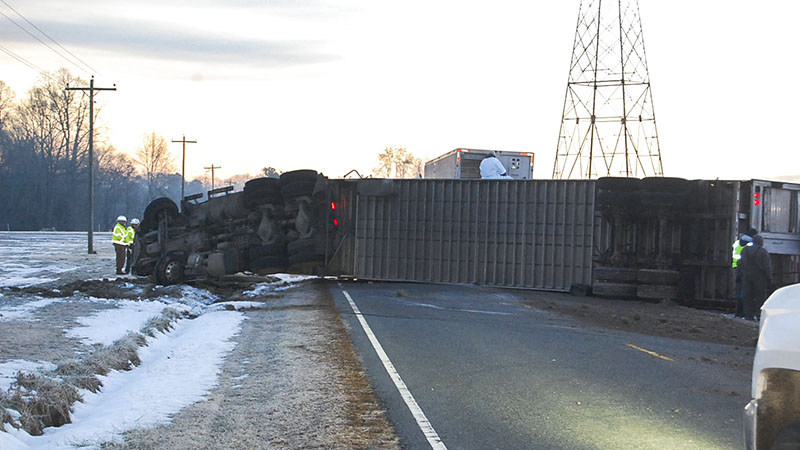 Submitted Sgt. Michelle Anaya A tractor-trailer carrying hogs to Smithfield Foods overturned on Four Square Road in Isle of Wight County early Wednesday morning. The road was closed until 10:11 a.m. Brian Crockett of Franklin, was not injured, but was charged with reckless driving.

ISLE OF WIGHT
A Franklin man was not hurt after the hog truck he was driving had overturned early Wednesday morning on the way to Smithfield Foods in Isle of Wight County. Sgt. Michelle Anaya, spokeswoman for the Virginia State Police, reported that the officers responded at approximately 4:34 a.m. to the scene in the 13100 block of Four Square Road near Courthouse Highway.

Brian D. Crockett, 23, had reportedly run off the roadway and overcorrected, which caused his vehicle to overturn.

As a result, Four Square Road was closed, and the Virginia Department of Transportation had a detour in place from Route 620 (Foursquare Road) to Route 637 (Central Hill Road) to Route 258 (Courthouse Highway) until 10:11 a.m.

Anaya added that distracted driving is cited as the accident’s cause. Crockett was charged with reckless driving/failure to maintain proper control of the vehicle.

Smithfield Foods reported that 10 animals were euthanized as the result of the accident.