A day in the life of a freshman legislator 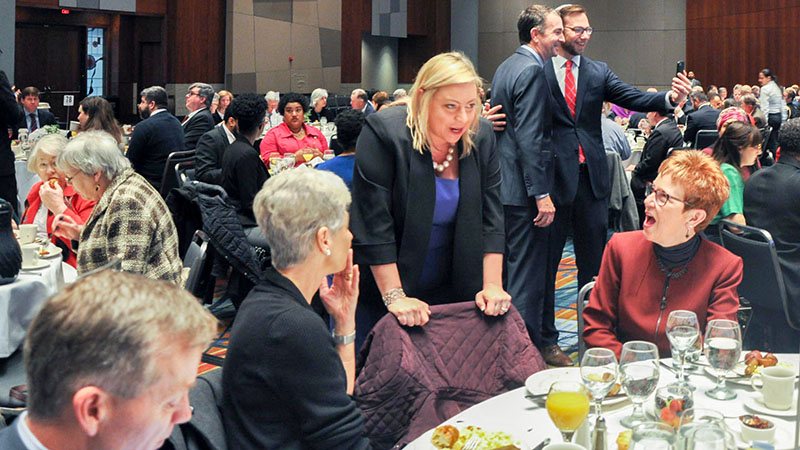 RICHMOND
With the clink of glasses, the 52nd annual Commonwealth Prayer Breakfast began what promised to be a big day at the state Capitol — but for Emily Brewer, it was a very special beginning.

Wednesday was Brewer’s first day as a member of the Virginia House of Delegates, representing the 64th District. She already had a full schedule before being officially sworn in as the youngest Republican delegate this session.

“My first accomplishment I’m hoping for is making sure I get everywhere on time,” said Brewer, 33. “To be honest, I think that my first accomplishment for today is just to make sure that I try to meet with everybody that I can, making sure that I give my constituents and some of the groups that are coming by my undivided attention as best I can in a very tumultuous week.”

Brewer began her first day in prayer with legislators and constituents. The Rev. Eric Manning of Emanuel A.M.E Church in Charleston, South Carolina, where the congregation responded with forgiveness after a white supremacist killed nine parishioners in 2015, delivered a message of unity and reconciliation at the Greater Richmond Convention Center. Brewer had a speaking role at the breakfast: She was chosen to pray specifically for youth and families in the commonwealth.

Brewer then headed back to her office in the Pocahontas Building on Main Street just south of the Capitol. She greeted visitors with a warm smile and an offer of snacks and drinks. On this first day on the job, she met with a representative from Voices for Virginia Children.

Brewer, who was adopted, has a heart for children in the foster system. She wants to improve their lives by advancing legislation that makes close-relative adoption easier. It currently takes about three years for a close family member to adopt a child.

The new delegate then briefly spoke with representatives from Transurban, which develops and manages toll roads. Afterward, she stopped by a meeting of the Virginia School Counselor Association to state her support of the organization’s work to help students.

Brewer, a Suffolk wine shop owner who was active in GOP circles but a newcomer to elective politics, said she recognizes the importance of school counselors in the many schools across her district. She said connecting with the counselors is an example of how she can better tap into the concerns of her constituents.

“I have seven localities to serve and a ton of constituents, so I have to meet with all those people and talk to them and see what their desires are, because it’s not just my vote or my legislation — it’s theirs, too,” Brewer said.

“So having a conversation with them and seeing what their needs are, that’s what’s important. I’m going to write my pathway depending upon their needs, not mine.”

Brewer encouraged her constituents to reach out to her with any concerns. She said she has an open-door policy.

“I really would love to hear from them. It’s so important because this isn’t my seat — it’s theirs,” Brewer said.

Afterward, Brewer prepared for the official opening of the General Assembly and her official swearing-in. She was chosen as one of six lawmakers, three Democrats and three Republicans, sent to inform the Gov. Terry McAuliffe that it was time for the Assembly to start. With her family watching from the gallery, Brewer raised her right hand and took the oath that made her an official legislator.

Brewer said that her friends and family play a significant role in her life. Her husband Joseph even left a note on her desk telling her to have a good day.

“My husband is really supportive; he’ll actually be here today. He’s pretty excited for me to be doing this,” Brewer said.

It was late in the afternoon when Brewer returned to her office. She debriefed with her legislative aide, Michael Kemp, and created a to-do list for the rest of the day. While there, she took the time sort through her email to respond to later. A few lobbyists and delegates stopped by to introduce themselves.

Brewer then attended the opening night reception to celebrate the first day of the General Assembly. After the reception, it was time for the State of the Commonwealth Address and McAuliffe’s farewell speech.

As McAuliffe said goodbye to the Capitol in his farewell speech, Brewer said hello and prepared herself for her journey serving the people of the 64th District.

“I think it’s going to be a very interesting year — and for me, making sure the commonwealth is ready for the future,” Brewer said. “And I think that we’ve probably elected some people that are ready for that.”