ISLE OF WIGHT
A beagle’s escape attempt from the Isle of Wight County Animal Shelter has gone viral after being captured on video and shared to the internet. An animal control officer recorded the attempt on her cell phone after noticing the beagle, named Buttermilk, scaling her kennel. 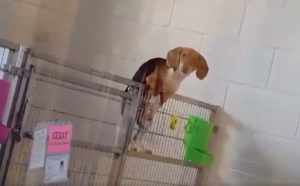 A screenshot of the video shows Buttermilk on top of her kennel, having climbed up the bars. — Isle of Wight Animal Shelter

The video was recorded on Monday and posted to the shelter’s Facebook page on Tuesday. Since then it has been viewed over 111,000 times and shared over 1,900 times.

Throughout the week, the video has also drawn the attention of regional and national media, having been aired on WTKR (Norfolk), CBS6 News (Richmond), WDBJ (Roanoke), 11Alive (Atlanta, Georgia), FOX8 (Cleveland, Ohio), KCCI (Des Moines, Iowa), and ABC10 (Sacramento, California) The story has also been syndicated in The Washington Post via the Associated Press.

“She [Buttermilk] just decided she does not want to be contained,” said Emily Glickman, an animal caretaker at the shelter.

Glickman also mentioned that this was not Buttermilk’s first escape attempt. She was first housed in the shelter’s acquaintance room, which is used as a visitation area for prospective adopters to meet and handle the animals. The room is secured with a baby gate, which Buttermilk either climbed over or squeezed through one night.

The next day, shelter staff again secured Buttermilk in the acquaintance room, but found the following morning that she had again escaped, this time having successfully opened the gate.

After Buttermilk’s second escape, shelter staff moved her to a puppy kennel, only to find her outside her kennel sleeping in a food bin one morning.

Buttermilk was adopted on Friday, Glickman said, and her new owner has been made aware of her escape abilities.

The Isle of Wight Animal Shelter wishes to convey to viewers that “no beagles were harmed in the making of this video,” having received several calls from those concerned about one part in which Buttermilk is seen leaping from the top of the approximately four-foot kennel back down to the floor. Glickman said that Buttermilk was examined by shelter veterinary personnel after the incident and found to be fine.

The shelter is located at 13044 Poor House Road, Windsor.