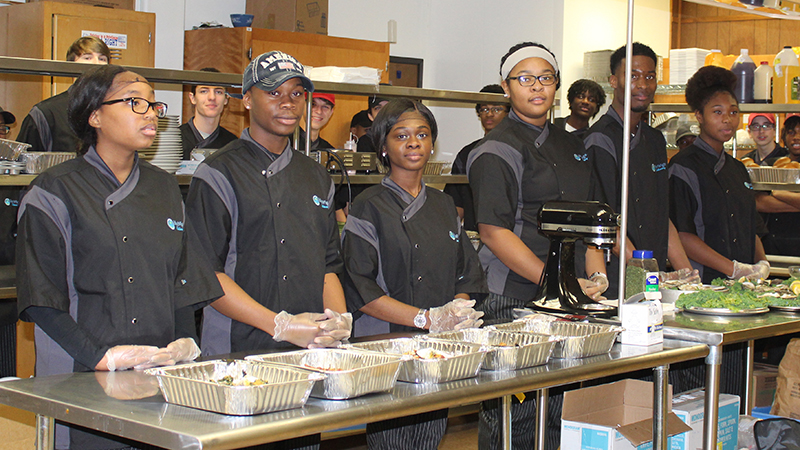 IWCS culinary arts students show off what they have prepared for the board members’ lunch. -- Stephen Faleski | Windsor Weekly

WINDSOR
Representatives from Isle of Wight County’s School Board and Board of Supervisors toured the division’s new in-house career and technical education facilities on Wednesday and observed current CTE students in action.

The tour began at the school board’s central office in Smithfield around 9 a.m. Its first stop was the new farm adjacent to Windsor Elementary School, where a team of agriculture students from Windsor and Smithfield high schools were working to construct fencing. So far this semester, the students have successfully constructed several goat sheds and installed a water line between fields for irrigation.

“It’s not just plants and animals, you have to maintain equipment and facilities,” said Lynn Briggs, the division’s director of community and media relations. “The [CTE] courses all have that mechanical component.”

According to Daniel Judkins, the division’s farm manager, interest in the agriculture CTE program is building among students. Recently, a class of ninth grade science students visited the farm to conduct soil tests, and several students asked about taking agriculture as an elective next year after the exercise was complete. Elementary students have also visited the farm this semester to learn about weather.

“We’re trying to include every grade level,” he said.

Judkins co-teaches each agriculture class with Windsor High School’s agriculture teacher, Jason Brittle. When inclement weather prevents students from working outside, they hold classes inside Windsor Elementary School in a classroom that Principal Ellen Couch has set aside for the agriculture program.

While the farm is not a certified organic operation, Judkins said that he prefers not to use pesticides on foodstuffs, and that he and Brittle have been trying to do everything as naturally as they can for safety reasons. Some of the program’s inaugural crop of collard greens have been sold to division employees and others have gone to the culinary arts program at Smithfield High School. The division hopes to eventually sell the produce students cultivate to the general public and use the proceeds to help fund the agriculture program.

The next stop was Windsor High School, where board members toured the division’s new building trades area, cosmetology lab and greenhouse. Building trades classes were being held outside that day, with students working to construct wooden sheds from the ground up. One will be given to the school’s horticulture class once completed. The school hopes to sell the others, with the revenue going to the building trades program.

“These are top of the line sheds,” said WHS Principal Laura Sullivan. “They’re doing everything correctly.”

Building trades students have also constructed picnic tables this semester, some of which the Town of Windsor has requested for use in one of its parks.

In the cosmetology lab, students were learning to apply chemical relaxers to hair. Cosmetology instructor Danielle Gibson said that in addition to learning the practical aspects of running a salon, her students also regularly practice for the cosmetology certification exam, a written test that Virginia requires for anyone to receive his or her state cosmetology license. The test includes anatomical knowledge of the face and scalp and knowledge of how hair functions on a cellular level.

“We’re not doctors, but we’re still working with humans,” she said.

The final stop was Smithfield High School, where the board members toured the school’s maker’s space, nursing area, welding lab and culinary arts kitchen. All CTE programs at Windsor and Smithfield are open to students enrolled at either high school.