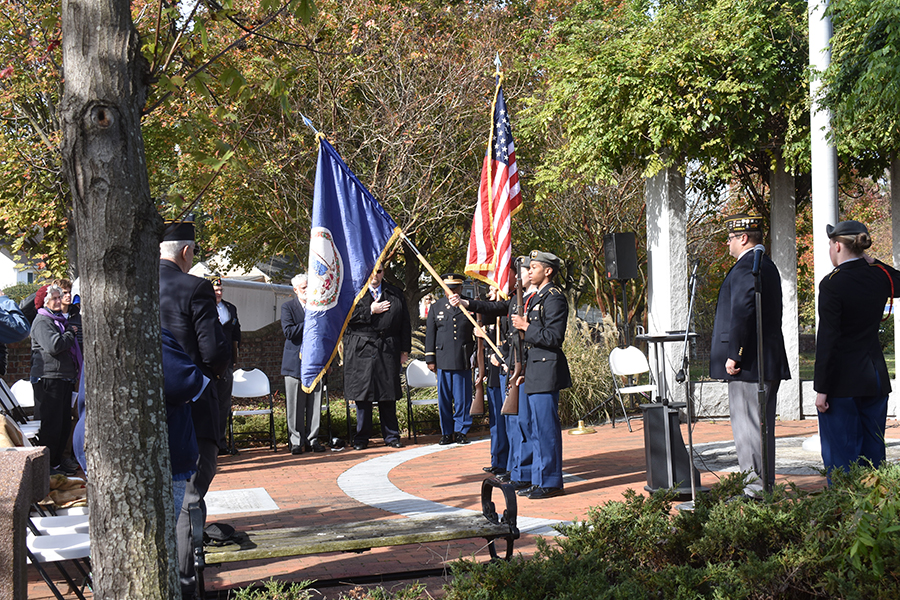 The Smithfield High School JROTC presented the colors close to the start of the ceremony.

The Veterans of Foreign Wars Post 8545 hosted their annual Veterans Day program on Nov. 11 at the Isle of Wight Veterans Memorial on North Church Street in Smithfield.

The ceremony began with the sounding of “Six Bells” by Lynn Moran, QMC (SS) Retired of the Navy, followed by welcoming remarks from emcee and past commander Christopher Garrett, Ltc. Army Retired.

Following the reciting of the Pledge of Allegiance, which was led by the JROTC, post Chaplain John Edwards gave the invocation. 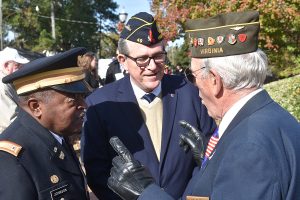 Bishop Nathaniel C. Johnson, who is retired from the Army, was the guest speaker at the ceremony on Nov. 11. With him in this photo are Retired Navy Capt. Matt Skeeter, first vice commander of the American Legion Post 49. They are listening to Retired Marine Ltc. Herb DeGroft, coordinator of the ceremony for VFW Post 8545.

Bishop Nathaniel C. Johnson, who is retired from the Army, was the guest speaker.

Following a benediction given by Post 49 Chaplain Charles T. More, a 21-gun salute was fired three times from seven guns. The band performed Taps and the JROTC concluded by retiring the colors.

Information is provided by John Brayshaw of the Post 8545.