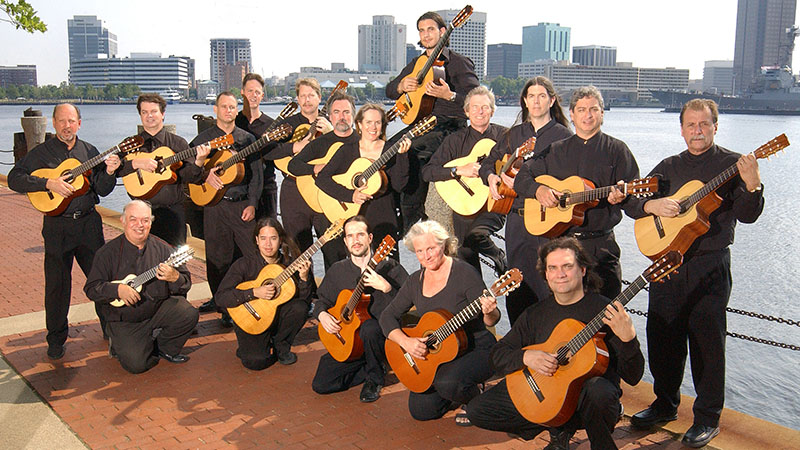 The Tidewater Guitar Orchestra, one of the first of its kind in the United States, is an ensemble of more than a dozen accomplished guitarists who use the lush timbral resources of an orchestra of guitars of different sizes to explore a rich repertoire ranging from Bach to Bartok and specializing in music of the Americas. Founded in 1995 by Sam Dorsey, the Tidewater Guitar Orchestra was inspired by a similar orchestra in Costa Rica led by Luis Zumbado.

The orchestra is composed of traditional classical guitars supplemented by requintos (soprano guitars tuned a fifth higher) and bajas (baritone guitars tuned a fourth lower). The TGO has commissioned new works from composers Andrew York and Ben Verdery and is particularly pleased to perform works written and arranged by its own members.

The orchestra has made numerous appearances locally and represented the United States at the International Guitar Festival in Costa Rica in October of 1999 and again in 2010. The ensemble is proud to be included in the Virginia Commission for the Arts Performing Arts Tour Directory and proud of their two CD’s; Prelude and Music of Europe and the Americas. Their recent performances continue to garner glowing reviews.

Among the featured works scheduled on the program will be: “Galante (Minuetto)” and “Oriental” by Enrique Granado; “Verano Porteno” by Astor Piazzolla; “Trez Danzas” by Ignacios Cervantes: and two  selections from “West Side Story” by Leonard Bernstein.