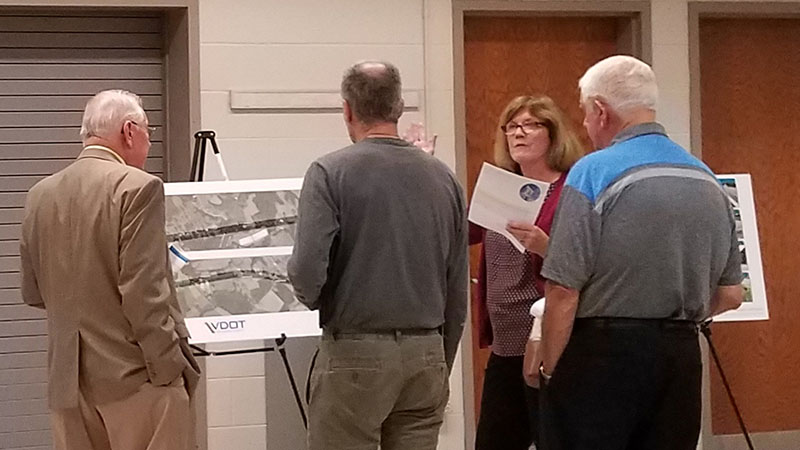 Residents of Windsor and surrounding areas in Isle of Wight County bordering Route 460 examine maps showing the areas of the highway that VDOT is now studying for safety concerns. -- Stephen Faleski | Windsor Weekly

WINDSOR
Between 10 to 20 residents of Windsor and the surrounding areas of Isle of Wight County along the Route 460 corridor took advantage of an opportunity to air their safety concerns regarding the highway on Thursday evening.

Virginia Department of Transportation representatives had scheduled a public meeting in Windsor High School cafeteria to present the preliminary results of their safety and operations study of the corridor. The two-phase safety assessment is still underway, evaluating the corridor from the town of Windsor’s western limits near Lover’s Lane to 1,500 feet west of the U.S. 58 interchange in the city of Suffolk.

“The purpose of this meeting is to get feedback from the locals,” said Jerry Pauley, transportation planning engineer for VDOT’s Hampton Roads District. “They’re on this road every day.”

The objective of the safety assessment, he said, was to identify lower-cost measures that could be implemented at hot spots and along the corridor within the existing right of way. The study began per a request from the municipal governments of Isle of Wight County and the city of Suffolk for VDOT to examine what could be done to improve the existing road now that the 460 bypass plans have been officially scrapped.

“We’re going to make a number of recommendations,” Pauley said. “Some of these recommendations VDOT will be taking care of, like signage, road markings. The larger projects, like adding the turn lanes, we will give the information to the localities and they would submit that to the Smart Scale program for funding.

“If it is a chosen project, it would be 100 percent funded with VDOT money allocated for 2023. Although we would be going for the 2023 money, there are some possibilities it could go sooner.”

He added that if the Town of Windsor wished VDOT to proceed with any of their more substantial recommendations, they would have to ask Isle of Wight County to submit a proposal to the Smart Scale on their behalf, as only independent municipalities, meaning cities and counties, are allowed to go after the 2023 money.

In early 2016, traffic engineer Walter Kulash, working on behalf of the Southern Environmental Law Center for the Town of Windsor, had proposed an alternative plan for the section of Route 460 that runs through the town’s borders when the 460 bypass was still being considered. The proposal, which the SELC submitted to the U.S. Army Corps of Engineers, included a two-way, left-hand turn lane down the median of the road and changes to the town’s six-way intersection to reduce congestion. However, VDOT representatives said that given the scope of what they are now investigating and the amounts of funding available, a majority of their recommended improvements to the road will likely not be within the town’s incorporated borders, nor will they include any widening of the existing highway due to right-of-way concerns.

“To even consider doing a center turn lane, you have to look at things like drainage, utilities, sidewalks, so your right of way would be expanding no matter what,” Pauley said. “We’re not even looking in the town because we’re looking at these low-cost improvements.

“There were several crashes within the town but most were property damage style crashes. We’re concentrating on the sections outside of town where the crashes have resulted in the most injuries so we can get the most bang for our buck.”

Town Manger Michael Stallings said that no changes have been made to Kulash’s proposal since the Route 460 bypass plans were defeated earlier this year. 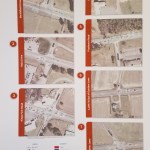 Additional locations of crashes along the 460 corridor and their severity. 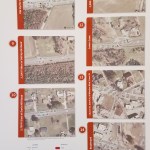 This diagram shows the locations of reported crashes along the 460 corridor and their severity.