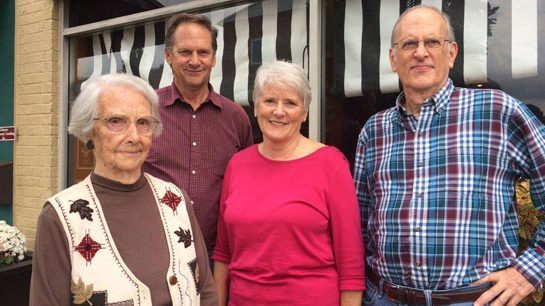 At left is Tour Anderson Carson with her daughter, Susan Carson Griffin, and sons Johnny and Charlie Carson. They were at the Wakefield Foundation for the exhibition on local military servicemen and women from the town. A display of artifacts belonging to Tour's late husband, John, was included. -- Stephen H. Cowles | Windsor Weekly

WAKEFIELD
The Historic Wakefield Foundation hosted another well-attended Family Day and Homecoming on Saturday, with plenty of food, vendors, music and fellowship. There was a military theme that was evident at the event starting with the opening parade’s grand marshall: Wilbur A. Burch is the oldest living veteran in Wakefield.

Inside the building was a special exhibition featuring military-related artifacts and memorabilia. According to Gayle Lanier, one of the board directors, these were loaned by 50 people. She added that this was one of the larger attended events at the Foundation in many years.

The uniform of Sgt. Jayton D. Patterson, who died in service in 2005, was among the items presented for the exhibition. — Stephen H. Cowles | Windsor Weekly

Lanier said the Wakefield Historical Association had its first meeting in February and right away started th work of preserving local veterans’ history.

Among the displays were items from the late John S. Carson Sr. His widow, Tour Anderson Carson, and their children, Susan C. Griffin, Charlie and Johnny Carson, were also present. There’s also a chapter about him in Ralph Seeley’s book, “Wakefield — Some of Our Veterans and Their Stories,” which was sold at the show.

The late Sgt. Jayton D. Patterson, for whom VFW Post 4411 is named, was also represented. The Marine, who was killed in duty on Jan. 5, 2005, was stationed in Iraq at the time of his death. VFW Post 4411 named its venue after him in August 2014. His father is Frank, and his mother, Sharon, was also present to answer questions about her son and his service.