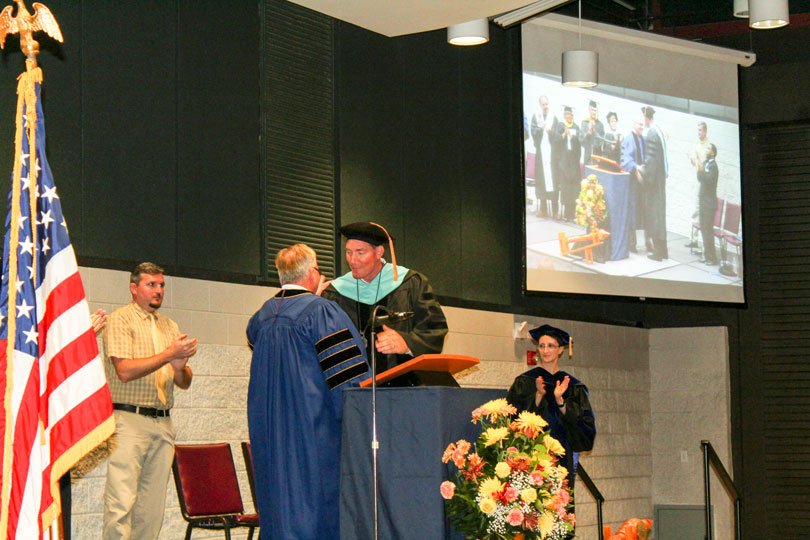 The ceremony began with an academic procession featuring delegations from colleges and universities throughout Virginia whom had been invited to attend. June Fleming, chair of Paul D. Camp’s local college board, delivered opening remarks, during which she spoke of Lufkin’s career accomplishments and the rigorous selection process the college used to select its new president.

“We’ve come to know this person, his sly, infectious smile, his inquiring mind, his love of sports and his reflective nature that is absolutely contagious,” Fleming said of Lufkin.

Her remarks were followed by those of Dr. Renee Felts, vice president of institutional advancement and workforce development at PDCCC, who introduced the collegiate delegations and other special guests, which included Paul D. Camp’s president emeritus, Dr. Doug Boyce and Congressman Bobby Scott (D-3rd) among others.

“He has become a big advocate for the program and even provided a lunch for us on occasion,” Perry said. “I was told on a couple occasions he even rearranged his schedule to fit [us] in.”

“I have nothing but the utmost respect for Dr. Lufkin, not just because he’s our president but because he reaches out to the students,” Saunders said.

“Dan is forever a coach,” DuBois said, highlighting Lufkin’s love of sports. “He understands who needs a gentle pat on the back and who needs a kick in the pants.

“Dan is an optimist by nature. No matter when you run into him, he always has the same answer. He’ll say, ‘Today is the best day of my life.’”

The proceeding concluded with Lufkin’s inaugural address, during which he spoke on the new electrical and instrumentation program at the college’s Suffolk campus, its new CNA program at Smithfield and its fast-track welding and global logistics programs in Franklin.

“With vessels entering the ports of Virginia in record numbers, we feel we are well poised to educate a highly skilled workforce that will respond to these growing needs and contribute to a new Virginia economy,” Lufkin said.

He also invited his wife, Catey, and children Lily, 9, and Layton, 6, up on stage, thanked them for their support and presented them with flowers. Tara Atkins-Brady, vice president of academic and student development at PDCCC, delivered closing remarks.

Lufkin began his position as president of PDCCC on June 28, 2016, having previously served as vice president for student affairs at Thomas Nelson Community College in Hampton, but had not been formally inaugurated as the college’s permanent president until Friday. Throughout his career, he has taught students from pre-kindergarten to master-level classes. During his time at PDCCC, the college has seen an increase in completion rates, including dual enrollment graduates, and the creation of the college’s very first baseball team, the Hurricanes.

He is originally from the rural foothills of the Adirondack Mountains area of upstate New York.